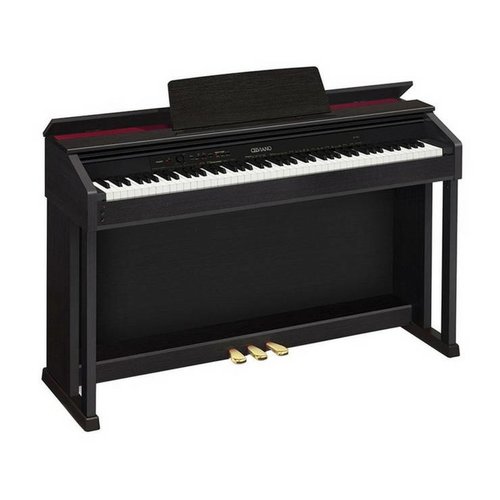 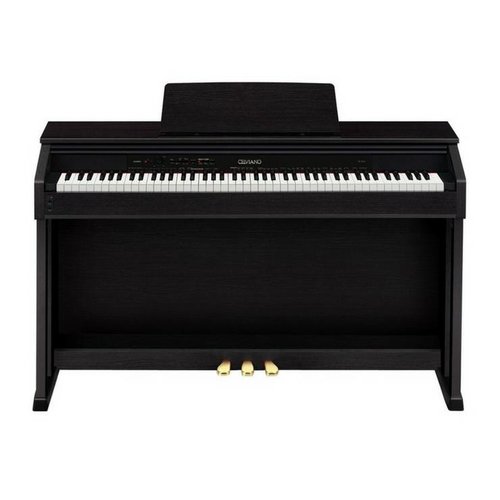 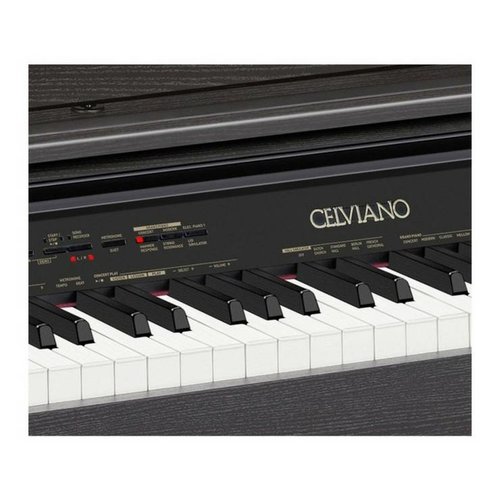 The Casio AP 460 is the perfect digital piano for the discerning performer. Featuring a newly designed sound source and a tri-sensor hammer action, this piano sounds and feels authentic to an acoustic piano. Read more

The characteristics of CASIO’s newly developed Multi-dimensional Morphing AiR* Sound Source reflect thorough attention to detail in expressing the rich, resonating tones inherent to the piano. The capacity of the installed memory has been expanded to achieve a longer sampling duration and enhanced waveform data quality. The temporal changes in tone that create sound you would expect only from a piano, beginning with the initial sound and leading into a beautiful extension until the sound eventually vanishes, are reproduced naturally. Even the length of the reverberation can be controlled at will by the player by adjustments in touch, as with an acoustic piano. Seamless variations that respond continuously to the power behind each stroke, not only in terms of volume but also in terms of the nuances of the sound itself, range from a fine, gentle ppp (pianississimo) to an intense, powerful fff (fortississimo). All 88 keys incorporate a stereo resonance simulator, moreover, that reproduces the string sounds of a grand piano remarkably realistically. The pleasure of listening to acoustic changes can be obtained by opening the grand piano-like lid installed on high-end models (AP-650M, AP-460), which place a particular focus on sound output quality. These developments represent an unprecedented evolution of the digital piano’s expressive power in the areas of both sound and resonance.

The acoustic level achieved by a digital piano is determined by the capacity of the memory that stores sounds after sampling. A new high-capacity memory, boasting a capacity in excess of approximately three times our previous models (converted linearly), is installed for the Multi-dimensional Morphing AiR Sound Source. The waveform data sampling capacity has increased dramatically, enabling natural reproduction of the delicate changes in waveforms associated with concert grand pianos. The sound quality and resonance have achieved astonishing evolution, realizing an ability to produce simultaneous sounds comprising up to 256 notes in high-end models (AP-650M, AP-460).

Digital pianos normally compress and record sound waveform data in their built-in memory. This data is then expanded and played back when recalled. As in the case of compressed audio data such as MP3, therefore, the played-back sound simply cannot avoid deterioration with respect to the original sound. But the advanced Lossless Audio Compression technology adopted for CASIO’s Multi-dimensional Morphing AiR Sound Source has made it possible to reproduce sounds without this deterioration of the original sound quality. This permits enjoyment of musical performances with acoustics that are immeasurably closer to natural piano sounds.

The sound produced by an acoustic piano is not only the sound associated with the keys that are struck. Other strings with frequencies closely associated with those producing the sounds resonate as well, adding their sound to give the music a uniquely rich resonance. In ordinary digital pianos, this string resonance effect is reproduced virtually with strings. The Multi-dimensional Morphing AiR Sound Source takes a different approach, however, by adopting a String Resonance system incorporating a stereo resonance simulator for all 88 keys. The resonance of the 88 keys is reproduced completely and naturally. The resonance realized by playing a single tone is differentiated from that realized by playing a chord to reproduce the resulting variations in resonance in a natural manner. This even enables players to achieve varying resonances, controlling them at will by the strength of their touch, and thus to realize performances with the unique expressiveness of an acoustic piano.

The external designs of the AP-650M and AP-460 models feature a lid on top that can be opened and closed. Opening the lid enables the pianist to play music with abundant dispersed sound, much like that produced by a grand piano with its lid open.

With an acoustic piano, the strings’ vibrations are amplified by the soundboard, generating sound from throughout the instrument. CASIO's new equalizing system imparts a unique sensation of three-dimensional depth and creates a natural sound space. It represents yet another advance in the pursuit of optimal sound and playing pleasure.

The deep, beautiful resonance resulting from the use of a damper pedal is also reproduced naturally by a stereo resonance simulator installed on all 88 keys, an approach that differs from conventional simulated reproduction employing effect processing. The attention to detail goes so far as to simulate the resonance created by the lifting of the dampers themselves when the pedal is pressed. A continuously variable system*2 has been adopted for the damper pedal, moreover, reproducing even the subtle changes in reverberation that occur in response to the delicate pressure exerted by partial pedal operation. This enables players to employ pedal operation to achieve gracefully expressive performances.

The volume and timbre of sound produced by a grand piano change depending on the degree to which the lid is open or closed. The Lid Simulator simulates these acoustic effects digitally. Pianists can select among four settings for opening and closing stages and enjoy playing music with the piano sound effect of their choice.

The 4 stages of a grand piano’s lid opening and closing have been investigated and imitated. The difference between the sound structures of a grand piano and a digital piano appears as a difference in timing, from the moment the instrument is played until the sound is audible. The new Tri-sensor Scaled Hammer Action Keyboard II responds by incorporating a system with three sensors that detect keystrokes sequentially. This permits minute variations in the time between detection of a keystroke and sound production, depending on the speed of the keystroke. The sensor system also enables a sound to be produced continuously, even when the key has not fully returned to its resting position, a feature assuring excellent playability when the same note is struck repeatedly. Also as in a grand piano, moreover, the action mechanism relies solely on the weight of the hammer, with absolutely no springs employed, thus providing both a definite playing response and a smooth touch. The keys become progressively heavier as the sound becomes lower and progressively lighter as the sound becomes higher, faithfully simulating this characteristic of a grand piano. The sizes of the hammers that strike the strings differ among the various key blocks in a grand piano. The sounding timing consequently varies subtly, even when keys are struck with the same strength. The new keyboard system carefully reproduces these differences in sound production timing from one register to another. It even simulates the differences in sound production timing according to the force with which a key is struck. The lengths of the reverberations and expressions a piano produces vary depending on the speed at which players release their fingers after touching the keys. The new keyboard system incorporates a Key Off Simulator that reproduces these nuances resulting from key release naturally. Authentic reverberations that feel just like those of a grand piano are expressed as a result.

The simulated ebony and ivory keys offer the luxurious feel and texture as well as the smooth touch of a grand piano keyboard. The minutely detailed crimp surface finish inhibits finger slippage due to sweat and gives the sensation of a perfect fingertip fit, even when playing for extended periods. High-quality audio data recordings of 10 live orchestra performances are installed. Pianists can play along with the recordings and enjoy the feeling of participating in a magnificent performance. Musical scores of the concerts are bundled.

Pianists can choose one of two recording functions, an audio recorder or a MIDI recorder, depending on their purpose.

Pianists can use the audio recorder to record their own performances on USB flash memory (sold separately). Since the recording employs the WAV file data format, performances can be played back* with CD sound quality on either the instrument itself or another device such as a PC, audio system or portable music player.* Playback possible on WAV file compatible devices.

Pianists can also use the piano’s built-in memory to record their performances. The MIDI recorder supports recording of separate tracks, allowing pianists to complete compositions that are difficult to play with both hands by recording the right-hand segment first and then recording the left-hand segment on top of it.

The layer function enables pianists to overlap two types of tones, while the split function lets them separate tones into lower and higher blocks.

The keys to the left and right of center on the keyboard can be set to the same tonal range. This Duet Mode is convenient when two players, such as a parent and child or a teacher and student, practice together.

The metronome comes in handy when practicing the piano.

A variety of built-in musical pieces can be played back for either listening pleasure or use in piano lessons. (Collection of musical scores bundled.)

The operation lock feature is used to lock the button operations to prevent unintentional setting changes.

Auto power off is a practical feature that prevents wasteful electricity consumption by shutting down the power automatically when no operation has been conducted for a certain period of time.